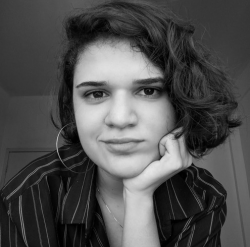 Marjorie Soares
Marjorie is a complete comic buff that not only knows Marvel and DC's line-ups inside out, but digs deep to find new and exciting properties on the horizon. Her favorites within the space are Invincible, Black Panther and Batman to name a few. However, she tries to split her time equally between comics and manga, and will often set down the reading material to watch some anime too.

Deadpool is sometimes a superhero, other times a villain, but most often, he’s an anti-hero – like Taylor Swift.

Why the range, you ask?

Well… it’s all related to the character’s ever-expanding popularity.

At the time of his creation, Deadpool was an unimportant villain, a typical mercenary. But the status quo changed in 1997 with his solo title. In actuality, it’s nearly impossible having a protagonist without qualities – if you don’t create empathy for your main character, your story will flop.

So when writers put the merc with a mouth front and center, he slowly transitioned into the role of an anti-hero.

Later on, Deadpool’s massive popularity boosted his heroic side and paired him with the likes of Spider-Man, Wolverine, and Captain America on all sorts of superhero stuff. This is far from an isolated case in pop culture. Whenever a villainous character gets too popular, they at least become an anti-hero – Harley Quinn and Loki, I’m looking at you!

I take the heroic transformation of mischievous characters as a good sign, a trait of human consciousness. At the end of the day, most of us want to root for something good, and that sort of reinstates my faith in humanity.

Call Me by Your Name

All this talk of supervillains, anti-heroes, and superheroes can give a person a headache. So let’s give each name its proper definition.

Superhero: The hero is the one who saves the day, duh.

But a superhero is the one who saves the day using their incredible superhuman powers. Deadpool has such abilities, so his superhero status only depends on his mood and the writer’s inclination. As both conditions are erratic, the mercenary’s heroics come and go.

Supervillain: According to the Merriam-Webster dictionary, a villain is “a character in a story or play who opposes the hero.”That definition becomes thought-provoking when we remember Deadpool’s solo title made him an anti-hero. It makes sense the merc with a mouth became more heroic with time. The mercenary can’t be a villain if he’s the center of the narrative instead of the opposition.

Anti-Hero: According to the Cambridge dictionary, an anti-hero is “the central character in a play, book, or movie who does not have traditionally heroic qualities, such as courage, and is admired instead for what society generally considers to be a weakness of their character.”

This definition maintains that when you’re the center of the story, you’re, at worst, an anti-hero. Deadpool fits the profile perfectly because he began taking righteous actions, albeit for misguided reasons – money – and using violent methods – killing people.

With this explanation out of the way, let’s explore Deadpool’s transition from villain to hero and its inherent subversions.

I’m Only Good at Being Bad

Deadpool might have the most straightforward introduction in a comic:

New Mutants #98, released in 1991, was a product of its time: the series mass-produced characters until one stuck with the audience. The authors struck gold with Deadpool, who became a fan favorite despite being far from his full potential.

In his first appearance, Deadpool was talkative but serious compared to his current incarnations. However, the creators planted a seed for his humorous ways early on. Being used to recent Deadpool comics, I was reading his debut mildly bored until the merc with a mouth did his magic and surprised me.

After Cable and Domino arrest the mercenary and discuss what to do with him, Deadpool says this:

Y’know, I’ve always wanted the chance to rehabilitate myself, you know, somewhere nice … How about a prison in the Bahamas?

What’s not to like? That’s classic Deadpool, and I love it!

Rooting for the Anti-Hero

The release of the 1997’s solo Deadpool series allowed the character’s heroic side to shine. Although he would still take money from anyone with no care for creed or consequence, the mercenary often saved the day.

Author Joe Kelly brought some of Deadpool’s trademarks to the comics, like senseless humor, breaking the fourth wall, and yellow-colored speech balloons. Thus his work is regarded by many as the quintessential Deadpool run. Fans consider this era a turning point: stories prior lacked the mercenary’s x-factor, while later tales sugar-coated the character.

I mostly comply with this statement. But I disagree regarding recent stories because some indeed portray the character with an unapologetic violent streak, as it’s the case with Deadpool Kills the Marvel Universe.

Still, I believe anti-hero Deadpool is the best.

I love the doors he opened for interaction with the larger Marvel Universe. I love how this Deadpool aimed to impress Spiderman and became an invaluable asset for heroes in Doomwar. It was clear Deadpool was helping T’Challa defeat Doom for the money –  the Black Panther is the wealthiest character in Marvel. Nonetheless, the mercenary’s heroic shenanigans were worthwhile for me.

I Can Be Your Hero, Baby

One comic at a time, the anti-hero path led to the hero’s journey.

Although some people might dislike this change, I don’t complain. After all, Deadpool’s rising heroics allowed for one of the best comic friendships, explored in 2016’s Spider-Man/Deadpool. The mercenary’s interactions with the webhead are my favorites. Still, team-ups with other characters are enjoyable– and two comics skillfully display this.

The first is Deadpool’s Secret Secret Wars, which revealed Deadpool was a part of the original 1984 Secret Wars event. It is a creative and fun premise to read, as Deadpool interacts with the most prominent Marvel figures and ultimately becomes the indisputable hero in the story.

The second comic is Deadpool Samurai, a fun Manga in which Deadpool starts a Japanese branch of the Avengers. At first, he does it for the money instead of justice, but little by little, the mercenary becomes nobler. Such is the case that by the end of the comic, the unlikely hero learns the story’s moral in full breaking-the-fourth-wall style.

Still, I must pinpoint that Deadpool’s shift toward heroism hasn’t robbed us of stories where he is the main villain. The Deadpool Killogy is the quintessential example of that. In these sagas, the merc with a mouth sets out to senselessly kill everyone: the Marvel Universe, literary characters, and even other versions of himself.

The trilogy is a nice break from the more clean-cut version of the character and a good reminder of Deadpool’s early maniacal tendencies. I definitely recommend you read that.

Question: Are Deadpool and Spiderman Friends?

Answer: Yes, Deadpool and Spiderman are friends. However, it wasn’t always that way. Both characters met a few times in comics, and while the mercenary worshipped spidey, the webhead didn’t return the sentiment.
The hero refused to work with an assassin until the circumstances – or, more likely, fan pleas – brought them together in the 2016 series Spider-Man/Deadpool. This comic was responsible for developing the friendship between Spiderman and Deadpool, who are now best friends.

Question: Are Deadpool and Spiderman Dating?

Answer: Spiderman and Deadpool aren’t dating, although many fans ship them together. Could that happen in the future? Maybe. Peter Parker has been portrayed as nothing but straight; however, the merc with a mouth is openly pansexual. So in an alternate timeline, they could be a couple. Who knows.

Question: Are Deadpool and Wolverine Related?

Answer: Deadpool and Wolverine aren’t relatives, but they are related. Both were subjects of the Weapon X program, which sought to create enhanced soldiers.
The program’s scientists added adamantium to Wolverine’s skeleton, who only survived due to his mutant healing factor. But once the x-man went awol, experts replaced him with Wade Wilson, an ordinary cancer patient. They added Wolverine’s DNA to Wilson, who acquired a healing factor and became Deadpool.

Answer: For Deadpool, anything goes: hero, anti-hero, or supervillain. It all depends on his mood and the writer’s inclination. Come to think of it, that’s one of the reasons I read so many of his comics – I love the unpredictability.
If you feel like me, don’t hesitate to check out this Deadpool Universe Guide. This article will introduce you to everything you need to know about the character and reveal the craziest things he’s ever done.