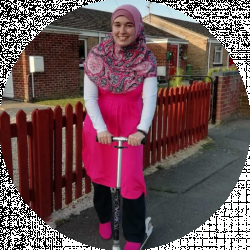 Melika Jeddi
In truth, Melika's love for collecting merch and Funko Pops probably just pips her love for collecting comic books, but these loves go hand-in-hand. Melika is a superhero nut and loves everything related to the MCU. Her most recent love has been Wandavision but as a whole, she can't get enough Marvel content. Outside of the world of comics, Melika is an avid gamer, a streamer and also runs her own pop culture site called Screenhype!

I’m not usually a fan of cartoons but Invincible was very much an exception for me. I was immediately enthralled by the compelling story and talented voice acting. In fact, it was just as captivating as any live-action show. In my head, I was expecting it to be somewhere along the lines of Marvel’s What If…? but it ended up being even better.

However, despite being received to critical acclaim, many people still haven’t heard of Invincible. Whilst other superheroes such as Captain America or Superman are household names, talking about Omni-Man to someone would probably just earn you a raised eyebrow or a “who?” response. It’s still relatively unknown in superhero media.

So, who exactly owns Invincible? Is it related to large comic companies like DC or Marvel? Let’s take a look!

Invincible is a comic series published by Image Comics. The TV series is produced by Skybound Entertainment, a multimedia conglomerate owned by Robert Kirkman (the creator of Invincible). Neither the series nor the comics have any relation to DC beyond similarities in the genre.

Based on the comic series of the same name, Invincible was first released in 2021. The series is produced by Skybound Entertainment and published by Amazon Studios.

It’s exclusively available on Amazon Prime and is one of several adult shows aimed at driving an audience towards purchasing Amazon Prime. Its executive producer is Robert Kirkman, the creator of the comic series.

There are a few production companies involved with the show in total. These are:

As you can see, DC is not on that list. Even though Invincible is about superheroes, it is not owned by or associated with DC Comics.

Published by Image Comics, the Invincible comic series was released in 2003. Its run came to an end in 2018 after 144 issues. The brain behind the idea was Robert Kirkman, a big name in the comic industry. It follows Mark Grayson, the teenage son of Nolan and Debbie Grayson.

However, Nolan Grayson is secretly the superhero known as Omni-Man, an alien from the planet Viltrum. When Mark develops his superpowers, he follows his destiny and becomes Invincible.

Interestingly, Invincible starred as a character in a Spider-Man comic. Robert Kirkman was working as a writer for Marvel at the time and wanted to bring his own character on board.

I feel this was a great choice, as when I first watched Invincible my immediate thought was how similar Mark Grayson is to Peter Parker. They’re both quick-witted teenagers who struggle to balance high school life with the responsibilities of their powers.

There was also a crossover between Invincible and DC. In Issue #33, Invincible is travelling between universes and meets Batman. This issue is set after the crossover with Spider-Man has already occurred.

Similarities to Other Comic Universes

DC and Marvel are the big names when it comes to superheroes, but Image Comics deserves recognition too. They amassed a net worth of $1.7 billion as of the end of 2022.

Although it’s not as large an amount as Marvel or DC, it’s still impressive. Image Comics has many other notable titles such as The Walking Dead, Saga, and Witchblade, but Invincible bears more similarities to other franchises.

The similarities to DC are mostly superficial. I must admit, I can see it in terms of the character designs. Darkwing is one of the Guardians of the Globe, and he looks stunningly like Batman.

His suit is gray and black, he wears a cowl with pointy ears, and he even has a jagged cape and a utility belt. He flies around on a hoverboard and throws various gadgets to intercept bad guys. I see him as being a cross between Batman (DC) and Green Goblin (Marvel).

Red Rush also reminds me of The Flash. He’s very fast and happens to wear red, but I suppose by that logic pretty much any fictional speedster could be compared to The Flash.

However, superhero visuals aside, the themes dealt with are starkly different. Although DC is definitely known for being gritty, Invincible crosses that line and moves into the realm of gratuitous violence.

In that respect, many fans have drawn comparisons between Invincible and The Boys. Both are Amazon exclusives, and both are targeted directly towards adults. Most superhero media is aimed at teenagers, although often broadly enjoyed by a range of age groups.

But the themes in Invincible and The Boys aren’t appropriate for younger viewers. For example, they both contain swearing and sex references, something you wouldn’t find in a show like Batman: The Animated Series.

They also both prominently feature violence and don’t go easy on the blood spatters. Death is explicit and gruesome, so it’s easy to see why fans see these shows as being so similar.

There have been several rumors of a future crossover between these two universes, and fans have even come up with their own ideas for what a movie might look like.

However, Steven Yeun (who voices Invincible) has stated that this will not be happening. For now, fans will have to stick to heated forum discussions about who would win in a fight between Homelander and Omni-Man (Omni-Man, and it’s not close).

Question: Is Invincible Getting a Season 2?

Answer: Yes, Invincible is confirmed for season 2 and will once again be exclusively released on Amazon Prime. It’s rumored to be launching in July 2023.

Question: Is Mark Grayson a Viltrumite?

Answer: The son of Debbie Grayson and Omni-Man, Mark is technically half-human, half-Viltrumite. However, due to the superior genes of Viltrumite, biologically he’s almost entirely pure-blooded Viltrumite. Despite this, Mark considers himself human in spirit, and his allegiance is with Earth.

Whilst it’s easy to see where the confusion arises, Invincible is not a DC franchise. It simply has some similarities in terms of the genre and the visual design of certain characters.

Currently (as of January 2023) there has only been one crossover between Invincible and DC, but that’s not to say that there won’t be any more in the future. The issue with crossovers is that they can spark legal controversies where different companies hold the rights to different characters.

Hopefully, this article has cleared up any questions you might have had about the rights to Invincible. We’ve also looked at similarities between Invincible and other popular franchises.

Personally, I’d love to see a crossover between The Boys and Invincible, even though Steven Yeun claimed it won’t happen. Which crossovers would you like to see?